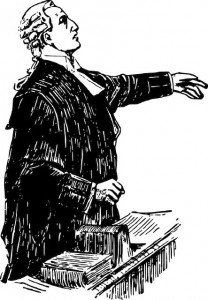 This article deals with the law on submitting an electronic record or email or CCTV Footage or Video Evidence or electronic document as evidence in a court of law in India.

Before we go into the aspect of electronic records, we need to see what is “evidence” and what is a “document”.

“Evidence”
“Evidence” means and includes-
(1) all statements which the Court permits or requires to be made before it by witnesses, in relation to matters of fact under inquiry, such statements are called oral evidence;
(2) all documents including electronic records produced for the inspection of the Court, such documents are called documentary evidence.

We now need to see the definition of “document(s)” as per the Act.

“Document”
“Document” means any matter expressed or described upon any substance by means of letters, figures or marks, or by more than one of those means, intended to be used, or which may be used, for the purpose of recording that matter.

Further, section 2 of the Act states that:

The Indian Evidence Act also deals with the Admissibility of Electronic Records.

shall be deemed to be also a document, if the conditions mentioned in this section are satisfied in relation to the information and computer in question and shall be admissible in any proceedings, without further proof or production of the original, as evidence of any contents of the original or of any fact stated therein of which direct evidence would be admissible.

Hence, the print-out of an email or CD or DVD of a document will be admitted as evidence by a court, just like any other document, provided that the “conditions” mentioned in the section are complied with.

Can CCTV Camera Footage or recording be submitted in an Indian Court as Evidence?

Yes. The same rules apply for CCTV Camera Camera footage and recordings, as they also form a part of “electronic records”.

The conditions for admissibility of electronic evidence as per section 65 B (1) are stated in part (2) of the same section and are as follows:

(2) The conditions referred to in sub-section (1) in respect of a computer output shall be the following, namely: –

(a) the computer output containing the information was

(4) In any proceedings where it is desired to give a statement in evidence by virtue of this section, a certificate doing any of the following things, that is to say, –

(a) identifying the electronic record containing the statement and describing the manner in which it was produced;

(c) dealing with any of the matters to which the conditions mentioned in sub-section (2) relate, and purporting to be signed by a person occupying a responsible official position in relation to the operation of the relevant device or the management of the relevant activities (whichever is appropriate)

shall be evidence of any matter stated in the certificate; and for the purposes of this sub-section it shall be sufficient for a matter to be stated to the best of the knowledge and belief of the person stating it.

What should the “Certificate” under section 65 B of the Indian Evidence Act 1872 contain?

Who can give the certificate under section 65B?

The certificate under section 65 B can be given by “any person occupying a responsible official position in relation to the operation of the relevant device or the management of the relevant activities”.

Does the computer or computer resource need to be produced in court as evidence?

No. Only the print-out or data on a CD or DVD needs to be produced.

Sample of Affidavit filed under section 65 B which was accepted by the High Court as sufficient:

“The petitioners, therefore, have filed an affidavit dated 3rd May, 2007 alongwith hard/ printed copies of the print outs/ emails duly certified by the concerned officer/employees, which read as under:

1. I state that I was employed in the chartering division of Sahi Oretrans (Pvt) Ltd. (hereinafter for the sake of brevity referred to as Sahi), a company having its office at 30 Western India House, 3rd Floor, Sir. P.M. Road, Mumbai 400 001. I state that Sahi acted as the ship broker in respect of the charter-party concluded between the petitioners and respondents, abovenamed.

2. I state that being employed in the chartering division of Sahi, I was personally involved in the transaction. I state that being ship brokers all emails were forwarded to the petitioners and the respondents through computer terminals in Sahi’s office, by me. In fact, my name appears in almost all the email correspondence.

4. I hereby produce hard copies of the emails which represent the contract entered into between the parties. The said emails are annexed hereto as Exhibit “A”. I crave leave to refer to and rely upon typed/clear copies of the same at the time of hearing, if necessary.

6. Accordingly, I am making this present affidavit to certify that the hard copies of the emails annexed at Exhibit “A” to “A4” hereto are a “true copy”/ reproduction of the electronic record which was regularly fed into/transmitted through my computer terminal in Sahi’s office in the ordinary course of activities. I further state that at all times the computer terminals utilized by me were operating properly and there is no distortion in the accuracy of the contents of the hard copies of the emails.”

Draft Affidavit / Certificate under section 65B of the Evidence Act coming up soon….Retweet or share to get it faster.