What is the meaning of “Interlocutory Orders”?

An Interlocutory Order (also known as an Interim Order) means the decision of the Court which does not deal with the finality of the case but settles subordinate issues relating to the main subject matter which maybe necessary to decide during the pendency of the case due to the time-sensitivity of those issues.

An Interlocutory Order is given mainly to ensure that the interests of either party are not harmed due to and during the process of justice.

In order to prevent the ends of justice from being, defeated the Court may, if it is so prescribed

(a) issue a warrant to arrest the defendant and bring him before the Court to show cause why he should not give security for his appearance, and if he fails to comply with any order for security commit him to the civil prison;

(b) direct the defendant to furnish security to produce any property belonging to him and to place the same at the disposal of the Court or order the attachment of any property;

(c) grant a temporary injunction and in case of disobedience commit the person guilty thereof to the civil prison and order that his property be attached and sold;

(d) appoint a receiver of any property and enforce the performance of his duties by attaching and selling his property;

(e) make such other interlocutory orders as may appear to the Court to be just and convenient.

Schedule 1 of the C. P. C. (Various Orders and Rules) deals with the procedural aspect in greater detail.

What is a Vakalatnama?

A Vakalatnama is a document in writing, appointing a lawyer or pleader to represent the clients matter in a court of law.

4.(1) No pleader Shall act for any person in any Court unless he has been appointed for the purpose by such person by a document in writing signed by such  person or by his recognized agent or by some other person duly authorized by or under a power-of-attorney to make such appointment.

What is the meaning of VP or VP Filed in the Court proceedings and Roznama?

VP means Vakil Patra, which is another name for Vakalatnama. Most courts use the term VP Filed in their Roznama or online records, to indicate that the Vakalatnama was filed. Sometimes even “SV filed” is mentioned in the Roznama. SV means: Signed Vakalatnama. 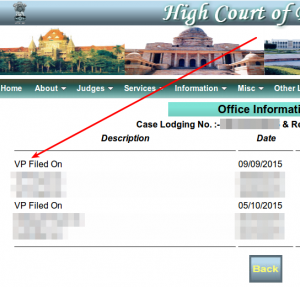 What does the Vakalatnama contain?

A vakalatnama gives a lot of authority to the pleader. It should be executed by the client with great care and scrutiny. Clauses like compromising the matter, appointing another Legal Practitioner, accepting money etc. may sometimes be detrimental to the interest of the client.

Who is authorised to give a Vakalatnama?

A Vakalatnama can be given by:

2. The recognized agents of parties by whom such appearances, applications and acts may be made or done are-

A vakalatnama can be given jointly by multiple parties in the case, to appoint the same pleader or set of pleaders.

Whom is the Vakalatnama given to?

The vakalatnama can be given to one or many advocates / pleaders. Each of their names must be specifically mentioned.

What is done after the Vakalatnama is given?

After the Vakalatnama is given, it is filed in court within the prescribed period.

Is the Vakalatnama a Power of Attorney?

Yes. For all practical purposes, the Vakalatnama is a Power of Attorney.

Does a Vakalatnama need to be stamped?

Yes.Advocates Welfare Fund Stamps need to be affixed to the Vakalatnama.

1. Every advocate shall affix stamp of a value of-

2. The value of the stamp shall neither be the cost in a case nor be collected in any event from the client.

3. Any contravention of the provisions of sub-section (1) or sub-section (2) by any advocate shall disentitle him either in whole or in part to the benefits of the Fund and the Trustee Committee shall report such contravention to the State Bar Council for appropriate action.

Is the Vakalatnama different for different Courts?

No. Since the vakalatnama has no specific form, if it contains all the required details, it can be used in any court.

What is a Vakalatnama called in other languages or countries?

What is the duration of the effect of the Vakalatnama? Can a Vakalatnama be withdrawn?

A Vakalatnama is said to be in force until:

A party who wishes to discharge the Advocate engaged by him may apply to the Court for an order of discharge by following a similar procedure and the Court, if it is satisfied, may pass orders discharging the Advocate and while doing so impose such terms and conditions as it may deem proper.

Can a client argue the case in person even if he has given a Vakalatnama to a lawyer / pleader?

1. Appearances, etc., may be In person, by recognized agent or by pleader.- Any appearance, application or act in or to any court, required or authorised by law to be made or done by a party in such court, may, except where otherwise expressly provided by any law for the time being in force, be made or done by the party in person, or by his recognised agent, or by a pleader appearing, applying or acting, as the case may be, on his behalf:

Provided that any such appearance shall, if the court so directs, be made by the party in person.

Can a lawyer who has been given a Vakalatnama, appoint another lawyer to plead the case in the same or different court?

Yes – If there is a specific clause in the Vakalatnama allowing him to do so.