This article deals with the topic of an FIR or First Information Report.

What is an FIR?

Under section 154 of the Code of Criminal Procedure (CrPC) and FIR is a report of First Information of a cognizable offence under the Indian Penal Code. It is basically a record of primary information received, regarding the commission of a criminal offence or crime as per IPC.

When is an FIR filed?

Where can an FIR be filed?

What does an FIR contain?

Sample of an FIR 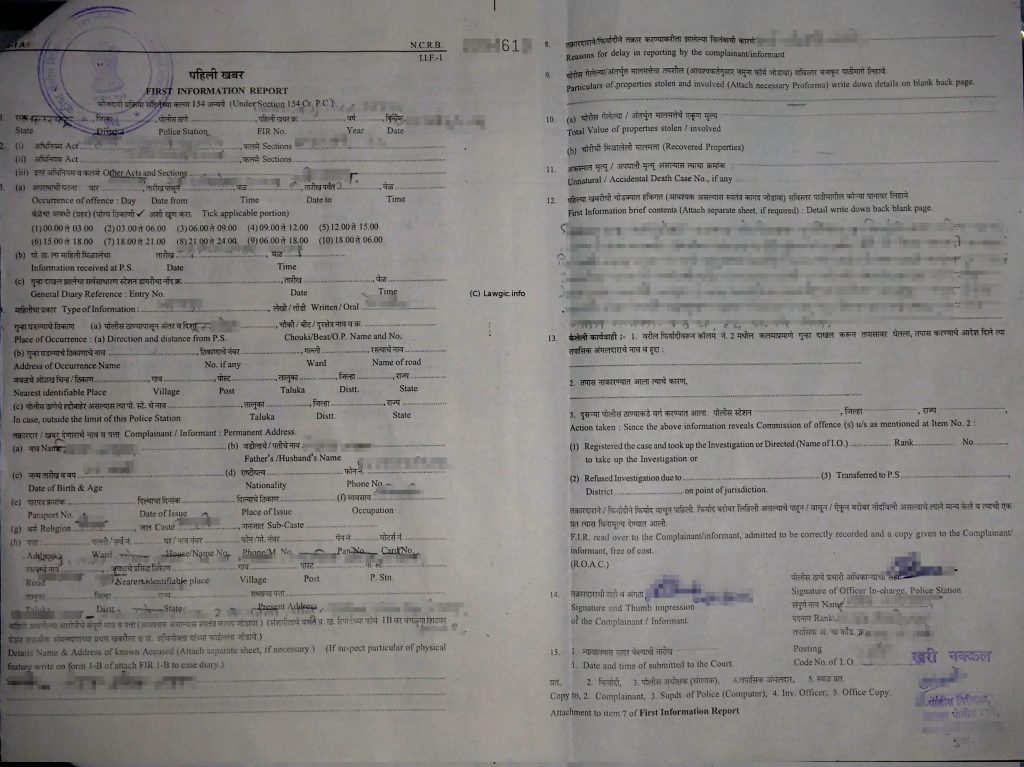 How does an FIR look? First Information Report Sample in India

This article explains what an “A Summary”, “B Summary”, “C Summary” Report is and what impact it has on a criminal case in India.

Many times we hear that the Police has filed a “Summary Report” and closed a Criminal Case or let off a criminal. But what do these summary reports or cases mean?

Who can file this Summary report?

The Investigating Officer has the authority to file a Summary report and close the case.

Under which law do these summary reports come?

These summary reports / final reports come under THE BOMBAY POLICE MANUAL1959 (Containing the Rules under the Bombay Police Act, XXII of 1951,the Bombay Police (Extension and Amendment) Act, XXXIV of 1959 and other Departmental Regulation.) VOLUME III.

(1) When there is no sufficient evidence to justify the forwarding of the accused to a Magistrate, the Police Station Officer or the investigating officer will release the accused.person on bail, if he is in custody.

(2) The Police Station Officer will then submit a final report to the Magistrate empowered to take cognizance of an offense on a Police report through the Superintendent of Police or the Sub-Divisional Police Officer, as the case may be, in the following three classes of cases:-
(a) Those in which it appears from the Police investigation that no offense has been committed.
(b) Those in which it appears from the Police investigation that only a non-cognizable offence has been committed.
(c) Those in which there are grounds for believing that an offence has been committed, but in which, in the opinion of the officer-in-charge of the police Station, there are not sufficient grounds to investigate or there is not sufficient evidence to justify sending anyone for trial, or in which the offender is not known or cannot be arrested and sent for trial.In cases referred to the Police by a Magistrate, the final report will be sent direct to the Magistrate.

(3) The final report should be written up carefully by the officers in-charge of the Police Station personally and should be accompanied by all the case papers numbered and indexed methodically. If the accused has been released on bail, the Magistrate should be requested to cancel the bail bond. He should also be requested to pass orders regarding the disposal of property attached, unless any of the articles, e. g., blood stained clothes, are required for further use in true but undetected cases. A request should also be made to the Magistrate to classify the case and to issue an appropriate summary of his order,viz. :-
“A” True, undetected (where there is no clue whatsoever about the culprits or property or where the accused in known but there is no evidence to justify his being sent up to the Magistrate (for trial).
“B” Maliciously false.
“C” Neither true nor false, e. g., due to mistake of fact or being of a civil nature.
“Non-cognizable” Police investigation reveals commission of only a non-cognizable offence.

(4) A Superintendent of Police or a Sub-Divisional Officer is not bound to forward a final report to the Magistrate immediately. He may of his own motion direct further enquiry or he may for special reasons permit a case to remain pending under investigation.

(5) When any further investigation is ordered and made subsequent to the submission of the final report the papers should, at each stage up to final disposal, be sent though the Superintendent of Police or the Sub-Divisional Officer. In urgent cases however, the Magistrate may return the papers,direct to the investigating officer.

(6) When a final report of an officer-in-charge of a Police Station is returned to him for further investigation or other purpose, the date of the submission of the final report in its last and complete form should be taken as the date of its submission to the Magistrate for the purpose of determining, the beginning of the period of 14 days within which a summary of the Magistrate’s final order should be sent