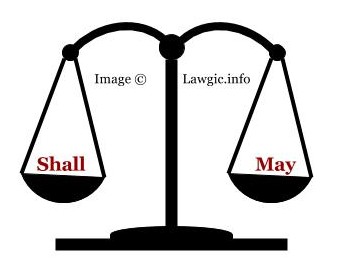 This article deals with the Interpretation of the words “may” and “shall” in Indian Law and what they really mean. Since these words are not technical terms as far as Law is concerned, reliance is placed upon various Case Law, which helps us understand how to interpret these terms.

1. plan to, intend to, or expect to:
I shall go later.
2. will have to, is determined to, or definitely will:
You shall do it. He shall do it.
3. (in laws, directives, etc.) must; is or are obliged to:
The meetings of the council shall be public.
4. (used interrogatively in questions, often in invitations):
Shall we go?

It is significant to note that the word used for the seller to realise market fee from his purchaser is “may” while the word used as for the seller to pay the market fee to the Committee is “shall”. Employment of the said two monosyllables of great jurisprudential import in the same clause dealing with two rights regarding the same burden must have two different imports. The legislative intendment can easily be discerned from the frame of the sub-clause that what is conferred on the seller is only an option to collect market fee from his purchaser, but the seller has no such option and it is imperative for him to remit the fee to the Committee. In other words, the Market Committee is entitled to collect market fee from the seller irrespective of whether the seller has realised it from the purchaser or not.

Section 55 uses the word “may sue‟ which indicates a discretionary element that a joint bhumidhar may approach the Court of Revenue Assistant for partition. Normally, the word “may‟ means discretion and is not mandatory. In the present case we do not see any reason why the word “may‟ in Section 55, should be read as “must‟ or “shall‟. Courts do not interpret the word “may‟ as “shall” unless such interpretation is necessary and required to void absurdity, inconvenient consequence or is mandated by the intent of the legislature which is collected from other parts of the statute. While examining the third aspect, the courts examine the purpose, object, design and scope of the statute.

10. To reiterate the words “may” and “shall” are distinct in meaning. While one confers a discretionary power, the latter one pelts out mandatory directions. These words are not synonymous but may be used interchangeably if the context requires such interpretation.

Amicable resolution of disputes and differences is encouraged and recognized by law. It is not forbidden. The courts while interpreting provisions of law tend to support settlement and mutual agreements. Unless a specific provision of law is breached and violated, a settlement agreement is not prohibited. The effort of Court is to minimize litigation and not to multiply it.

“7. …It follows that the order to be passed must be discretionary and the power to pass it must, therefore, be directory and not mandatory. In other words, the word “may”, used before “stay” in Section 442 of the Act really means “may” and not “must” or “shall” in such a context. In fact, it is not quite accurate to say that the word “may”, by itself, acquires the meaning of “must” or “shall’ sometimes. This word, however, always signifies a conferment of power. That power may, having regard to the context in which it occurs, and the requirements contemplated for its exercise, have annexed to it an obligation which compels its exercise in a certain way on facts and circumstances from which the obligation to exercise it in that way arises. In other words, it is the context which can attach the obligation to the power compelling its exercise in a certain way. The context, both legal and factual, may impart to the power that obligatoriness.
8. Thus, the question to be determined in such cases always is whether the power conferred by the use of the word “may” has, annexed to it, an obligation that, on the fulfilment of certain legally prescribed conditions, to be shown by evidence, a particular kind of order must be made. If the statute leaves no room for discretion the power has to be exercised in the manner indicated by the other legal provisions which provide the legal context. Even then the facts must establish that the legal conditions are fulfilled. A power is exercised even when the court rejects an application to exercise it in the particular way in which the applicant desires it to be exercised. Where the power is wide enough to cover both an acceptance and a refusal of an application for its exercise, depending upon facts, it is directory or discretionary. It is not the conferment of a power which the word “may” indicates that annexes any obligation to its exercise but the legal and factual context of it. This as we understand it, was the principle laid down in the case cited before us: Frederic Guilder Julius v. Right Rev. Lord Bishop of Oxford: Re v. Thomas Thellusson Carter.(5 AC 214).
10. The principle laid down above has been followed consistently by this Court whenever it has been contended that the word “may” carries with it the obligation to exercise a power in a particular manner or direction. In such a case, it is always the purpose of the power which has to be examined in order to determine the scope of the discretion conferred upon the donee of the power. If the conditions in which the power is to be exercised in particular cases are also specified by a statute then, on the fulfilment of those conditions, the power conferred becomes annexed with a duty to exercise it in that manner. This is the principle we deduce from the cases of this Court cited before us: Bhaiya Punjalal Bhagwandin v. Dave Bhagwatprasad Prabhuprasad (AIR 1963 SC 120), State of Uttar Pradesh v. Jogendra Singh (AIR 1963 SC 1618), Sardar Govindrao v. State of M.P.(AIR 1965 SC 1222), Shri A.C. Aggarwal, Sub-Divisional Magistrate, Delhi v. Smt Ram Kali, Bashira v. State of U.P.(AIR 1968 SC 1) and Prakash Chand Agarwal v. Hindustan Steel Ltd.((1970) 2 SCC 806 ).”

To elucidate the words “may” and “shall”, and interpret them, the Supreme Court in Dinesh Chandra Pandey v. High Court of Madhya Pradesh, (2010) 11 SCC 500 has held as under:-

“15. The courts have taken a view that where the expression “shall” has been used it would not necessarily mean that it is mandatory. It will always depend upon the facts of a given case, the conjunctive reading of the relevant provisions along with other provisions of the Rules, the purpose sought to be achieved and the object behind implementation of such a provision. This Court in Sarla Goel v. Kishan Chand, took the view that where the word “may” shall be read as “shall” would depend upon the intention of the legislature and it is not to be taken that once the word “may” is used, it per se would be directory. In other words, it is not merely the use of a particular expression that would render a provision directory or mandatory. It would have to be interpreted in the light of the settled principles, and while ensuring that intent of the Rule is not frustrated.”

“26. Thus, this Court, keeping in view the objects of the Act, had considered whether the language in a particular section, clause or sentence is directory or mandatory. The word „shall‟, though prima facie gives impression of being of mandatory character, it requires to be considered in the light of the intention of the legislature by carefully attending to the scope of the statute, its nature and design and the consequences that would flow from the construction thereof one way or the other. In that behalf, the court is required to keep in view the impact on the profession, necessity of its compliance; whether the statute, if it is avoided, provides for any contingency for non-compliance; if the word „shall‟ is construed as having mandatory character, the mischief that would ensue by such construction; whether the public convenience would be subserved or public inconvenience or the general inconvenience that may ensue if it is held mandatory and all other relevant circumstances are required to be taken into consideration in construing whether the provision would be mandatory or directory. If an object of the enactment is defeated by holding the same directory, it should be construed as mandatory whereas if by holding it mandatory serious general inconvenience will be created to innocent persons of general public without much furthering the object of enactment, the same should be construed as directory but all the same, it would not mean that the language used would be ignored altogether. Effect must be given to all the provisions harmoniously to suppress public mischief and to promote public justice.”

“Mandamus which is a discretionary remedy under Article 226 of the Constitution is requested to be issued, inter alia, to compel performance of public duties which may be administrative, ministerial or statutory in nature. Statutory duty may be either directory or mandatory. Statutory duties, if they are intended to be mandatory in character, are indicated by the use of the words “shall” or “must”. But this is not conclusive as “shall” and “must” have, sometimes, been interpreted as “may”. What is determinative of the nature of duty, whether it is obligatory, mandatory or directory, is the scheme of the statute in which the “duty” has been set out. Even if the “duty” is not set out clearly and specifically in the statute, it may be implied as correlative to a “right”.

Prof. Wade, also, in his well-known treatise ‘Administrative Law’, 8th Edition, at page 609 makes a distinction between a discretionary power and obligatory duties in the following terms:

“Obligatory duties must be distinguished from discretionary powers. With the latter mandamus has nothing to do: it will not, for example, issue to compel a minister to promote legislation. Statutory duties are by no means always imposed by mandatory language with words such as ‘shall’ or ‘must’. Sometimes they will be the implied counterparts of rights, as where a person ‘may appeal’ to a tribunal and the tribunal has a correlative duty to hear and determine the appeal. Sometimes also language which is apparently merely permissive is construed as imposing a duty, as where ‘may’ is interpreted to mean ‘shall’. Even though no compulsory words are used, the scheme of the Act may imply a duty.

“Under section 190(1)(b) of the Code of Criminal Procedure, the Magistrate is bound to take cognizance of any cognizable offence brought to his notice. The words “may take cognizance” in the context means “must take cognizance”. He has no discretion in the matter, otherwise that section will be violative of Article 14.”