I was caught for having sun film on my car glass. It was put by the car company. Is it illegal?

As per a recent Supreme Court judgement clarification, the use of black films of any VLT (Visual Light Transmission) percentage or any other material upon the safety glasses, windscreens (front and rear) and side glasses of all vehicles throughout India is prohibited.
Even though it may have been fit by your car vendor or local mechanic, it is illegal and must be removed at the earliest.

Since when was the putting of the sun film made illegal?

The putting of sun film of any kind was never legal.

This was clarified in a Supreme Court Judgement of 4th May, 2012 – Avishek Goenka Vs. Union of India & Anr.

Manufacturers, mechanics etc. misled the public into believing that if an external film of permitted VLT (Visual Light Transmission) percentage was put, then it was legal. The Motor Vehicles Rules were interpreted to further the cause of the manufacturers and vendors. The Supreme Court in its judgement has shed some light on this point as well:

19. ….. Even if we assume, for the sake of argument, that Rule 100 is capable of any interpretation, then this Court should give it an interpretation which would serve the legislative intent and the object of framing such rules, in preference to one which would frustrate the very purpose of enacting the Rules as well as undermining the public safety and interest. Use of these black films have been proved to be criminal’s paradise and a social evil. ….

21. In the present case as well, even if some individual interests are likely to suffer, such individual or private interests must give in to the larger public interest.

What has always been permitted, is the use of tinted glass and not an external film put on top of the glass. 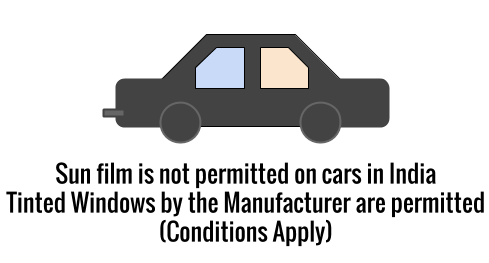 Can I have tinted glasses?

Yes. Tinted glass is allowed to be used in the vehicle as per the specifications below:

What about VIPs, politicians, Consulate Cars etc.? They roam around freely with very dark glasses

The Supreme Court has clearly stated that while there is no specific law which exempts persons to use the black films for security reasons, the responsibility is upon the police and Home Ministry to grant such an exemption.

The cases of the persons who have been provided with Z and Z+ security category may be considered by a Committee consisting of the Director General of Police/Commissioner of Police of the concerned State and the Home Secretary of that State/Centre.
Certificates should be provided only in relation to official cars of VIPs/VVIPs, depending upon the category of security that such person has been awarded. The State / Central  government is free to make any regulations.

This means that people who do not have Z or Z+ security cover are not permitted to use external sun films.