Did you know that there were laws governing speed breakers? Very few government officers and even motorists are aware of these laws and design specifications. This article attempts to explain the law on speed breakers in India. 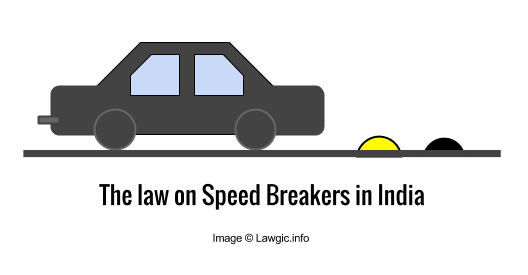 The law on speed breakers and speed humps in India

What are speed breakers?

Speed Breakers are traffic management devices which use vertical deflection to slow down vehicles passing over them.

Why are speed breakers used?

Speed breakers are used to slow down traffic near schools, hospitals so that children can cross the road more easily or senior citizens can cross at ease. They are also placed near toll booths and entry points of bridges or narrow roads, to ensure that motorists reduce their speed.

Why are unplanned or illegal speed breakers bad?

Is there a law governing speed breakers?

There are various judgements by various Courts, directing the government to formulate rules and policies for setup of speed breakers.

Laws which refer to speed breakers:

Where can speed breakers be placed as per law?

Speed Breakers must be used only in urban areas for minor roads and residential areas. Speed Breakers are NOT recommended on high-speed roads or highways outside urban limits.

As per the Indian Road Congress guidelines, dated 12 June 1987, speed breakers must be placed on minor roads, only as follows:

Use of speed breakers is justified only in the following 3 circumstances:

Other place where these may be used include:

1. Any situation where there is a consistent record of accidents primarily attributed to the speed of the vehicles e.g. when hazardous sections follow a long tangent approach;

3. Approaches to weak or narrow bridges and culverts requiring speed restriction for safety;

4. On the minor arms of uncontrolled junctions and at railway level crossings;

6. Places of ribbon development, where road passes through builtup areas and vehicles travelling at high speeds are a source of imminent danger to pedestrians.

What are the specifications for ideal speed breakers?

The Indian Roads Congress has suggested that speed breakers are formed basically by providing a rounded (of 17 metre radius) hump of 3.7 metre width and 0.10 metre height for the preferred Advisory crossing speed of 25 km/h for general traffic. It is mentioned that more humps be constructed at regular intervals depending on desired speed and acceleration/deceleration characteristics of vehicles and that the distance between one hump to another can vary from 100 to 120 metres centre to centre.

The “Draft Guidelines on the provision of Speed Breakers for Control of Vehicular speed on Minor Roads” (Highly Recommended read) states that:

1.1 Definition: A speed breaker is a hump surface across the roadway having a rounded shape with width greater than the wheel base of most of the vehicles using the road. When there is decrease variation in sensory stimuli and at locations where speed controls are desired, a speed breaker acts as a strong stimuli to arouse reaction in the brain. Since the driver reaction times are faster in response to audible and tactile stimuli than to visual stimuli, a driver subconsciously reduces the speed.

An ideally designed hump should satisfy the following requirements:
i. There should be no damage to vehicles nor excessive discomfort to the drivers and passengers when passing at the preferred crossing speed.
ii. The hump should not give rise to excessive noise or cause harmful vibrations to the adjoining buildings or affect the other residents of the area.
iii. Above the design speed, a driver should suffer increasing level of discomfort (but without losing directional control and without any vehicle damage) depending on the extent through which design speed is exceeded.

What type of marking and painting needs to be done on speed breakers? 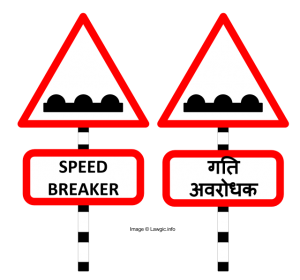 What type of marking and painting needs to be done on speed breakers in India?

Location of the speed breakers are authorised by the Traffic Police Department on its own or on suggestions received from the public .

The Director General of Police of the state and concerned Municipal Commissioners/ Councillors in charge of Municipal Corporations/Councils are also accountable for the upkeep and maintenance of the speed breakers and to ensure that new speed breakers are constructed in consonance with the guidelines provided by the Indian Road Congress.

The National Highways Authority of India is responsible for speed breakers on the highways.