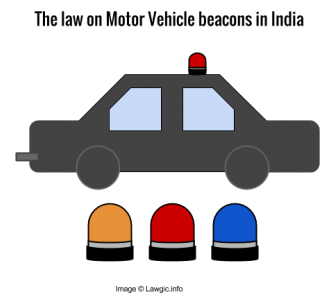 The law on motor vehicle beacons and flashers in India

==THIS ARTICLE IS UNDER CONSTRUCTION==

Who is authorised to use beacons / flashers / sirens on their vehicles?

Red light with flasher on the top front of vehicle, while on duty anywhere in the country:-

Can the beacon be used when the Officer is not present in his vehicle?

No. In case the vehicle fitted with red light on top front is not carrying the dignitaries, then such red light shall not be used and be covered by a black cover.

Can I use a beacon on my vehicle?

Unless you are an officer authorised by the State or Central Government, you cannot use the beacon on your vehicle.

Can I keep the beacon on the dashboard of my vehicle?

No. You cannot keep the beacon on the dashboard of the vehicle, even if used by an authorized person, when not on duty. When not in use the beacon must be covered with a black cover.

Which law governs the use of beacons and flashers?

Central Motor Vehicles Rules, 1989 Rule 108, which is extracted below:–

Use of red or white lights:– No motor vehicle shall show a red light to the Front or light other than red to the rear:

Provided that the provision of this rule shall not apply to-

(i) the internal lighting of the vehicle or

(ii) the amber light, if displayed by any direction indicator or top light;

(iii) a vehicle carrying high dignitaries as specified by the Central Government or the State Government from time to time or a vehicle escorting such vehicle;

(iv) the blinker type of red light with purple glass fitted to an ambulance van used for conveying patients; or

(v) to a vehicle having a lamp fitted with an electrical bulb, if the power of the bulb does not exceed seven watts and the lamp is fitted with frosted glass or any other material which has the effect of diffusing the light.

Section 70 of the Motor Vehicles Act 1939 which is extracted below conferred the power on the State Government for making rules, inter alia, regarding signalling appliances, lamps and reflectors:–

“Power to make rules:– (a) A State Government may make Rules regulating the construction, equipment and maintenance of motor vehicles and trailers.

Where can I report misuse of a beacon?

What are the penalties for misusing a beacon?